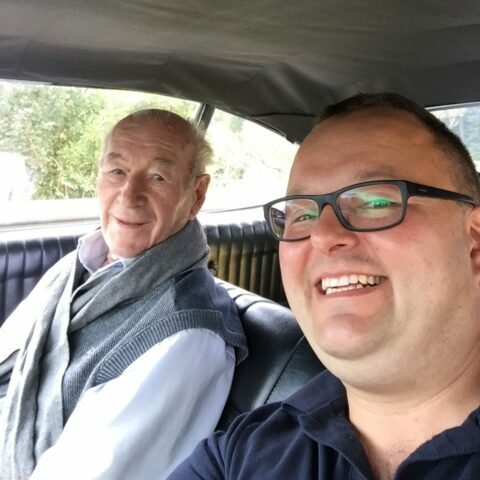 My grandfather founded a small workshop in Naunhof (near Leisnig) in Saxony at the end of the 40s of the last century and thus laid the foundation stone for my company Cars & Bikes Fochtmann.

Quickly, his craftsmanship established itself and provided him with a decent clientele. In April 1950 Bernd Fochtmann, my father, saw the light of day and was virtually born into his later profession.

In May 1978 I saw the light of day and also quickly had my fingers in the oil and on the engine block.

My father also studied this subject and in 1986 took over the parental company as a graduate engineer. He continued to run the company, from which Cars & Bikes Fochtmann emerged, with a large customer base.

With a Simson to Honda?

A Simson workshop contract also helped increase the customer base in the GDR.

In 1989, shortly before the fall of the Wall, ground was broken for a new workshop in Grossweitzschen. The old workshop was bursting at the seams.

The turn of the century came and my father immediately went to look for a factory contract for a Japanese motorbike manufacturer. No one opened the door at Suzuki, Yamaha and Kawasaki. It is due to this circumstance that my company is still associated with Honda today.

In 1990 my father also got the contract for Honda cars. We then opened a workshop near Grossweitzschen for five years.

In 1995 my father opened the present company headquarters in Döbeln; we were asked to build a classic car dealership.

Made a master – A building block for Cars & Bikes Fochtmann

In the meantime, I grew up (I am far from adulthood, according to many) and learned the trade, as did my father and grandfather. After completing my apprenticeship, I asked to be allowed to become a master car mechanic, which I was able to do successfully on 01.11.2001. Soon we changed the motorbike business into a car dealership. This allowed us to concentrate everything in one place.

2008 was the year of the economic crisis. Unfortunately, my father could no longer keep the company due to the high costs. He gave me a choice: either go to work or jump into the deep end and start your own business?

I thought about it for a few days and came to the decision to try it. With all the ups and downs that go with the business, I am glad I took this step. Since then I have been able to welcome many new customers and make them happy.

Who is behind Cars & Bikes Fochtmann?

Currently our team consists of Henry, Steve, Stanley and Kai who take care of all the needs of our customers. Mum and Dad still give me a helping hand. And I hope it will stay like this for quite a while.

Service in the third generation

Cars & Bikes Fochtmann is known today in Döbeln and the surrounding area as a reliable contact partner for everything to do with cars and motorbikes. We are certified as a Honda service partner. As a master craftsman’s business, we are also known to our customers as a type-open workshop.

This website uses cookies to improve your experience while you navigate through the website. Out of these, the cookies that are categorized as necessary are stored on your browser as they are essential for the working of basic functionalities of the website. We also use third-party cookies that help us analyze and understand how you use this website. These cookies will be stored in your browser only with your consent. You also have the option to opt-out of these cookies. But opting out of some of these cookies may affect your browsing experience.
Necessary Always Enabled
Necessary cookies are absolutely essential for the website to function properly. This category only includes cookies that ensures basic functionalities and security features of the website. These cookies do not store any personal information.
Functional
Functional cookies help to perform certain functionalities like sharing the content of the website on social media platforms, collect feedbacks, and other third-party features.
Performance
Performance cookies are used to understand and analyze the key performance indexes of the website which helps in delivering a better user experience for the visitors.
Analytics
Analytical cookies are used to understand how visitors interact with the website. These cookies help provide information on metrics the number of visitors, bounce rate, traffic source, etc.
Advertisement
Advertisement cookies are used to provide visitors with relevant ads and marketing campaigns. These cookies track visitors across websites and collect information to provide customized ads.
Others
Other uncategorized cookies are those that are being analyzed and have not been classified into a category as yet.
SAVE & ACCEPT
Diese Website benutzt Cookies. Wenn du die Website weiter nutzt, gehen wir von deinem Einverständnis aus.OKNeinDatenschutzerklärung